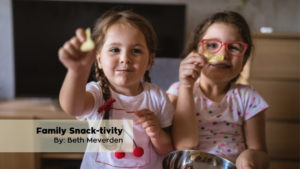 September 20th is National String Cheese Day. Here’s an activity your family can do to celebrate in a snacky way!

If your children are having a hard time coming up with ways to eat string cheese besides peeling and eating it, here are some suggestions: homemade fried mozzarella sticks, homemade lunchables with sliced meat and crackers, homemade stuffed crust pizza, lunchmeat/cheese roll ups, tortilla roll ups, cheese, meat and veggie kabobs on toothpicks, or homemade stuffed pasta.

Let’s make one of those yummy cheese stick snack suggestions! Follow me to the kitchen!

While you are making and enjoying the snack together, share the rest of the activity lesson with your children.

One of the times cheese is mentioned in the Bible was when David was helping his father by taking grain and bread to his brothers and 10 cuts of cheese to his brothers’ captain in 1 Samuel 17:17-18.

Do you remember what David’s brothers were doing when he delivered the food to them?

David’s brothers were in the Israelite army that was fighting against the Philistines and were being taunted by a certain 9-foot-tall Philistine man. Do you remember his name?
Listen to answers.

Goliath was making fun of the Israelites and saying bad things about God, too.

Sometimes encouraging someone means standing up for them and doing the right thing. That’s what David did for his brothers and the rest of Israel. He brought them food to give them strength and he fought against that giant of a man and defeated him with strength from God! Then the Israelites chased and defeated the rest of the Philistines. That’s some serious encouragement!

As we finish our Family Snack-tivity today, let’s thank God for David’s example of encouraging his brothers and nation. Let’s also thank God for future opportunities to support and encourage other people by standing up for them, too!
Pray together.